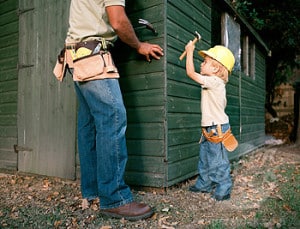 I hadn’t looked at it in a couple of decades, but recently I had occasion to crack open the thesis I wrote as part of my M.A program. The thesis was a discussion of the concept of imitation in Paul’s writings. The discussion centers on Paul’s use of the Greek word group from which we derive our English words, imitation and imitate.

I share with you the conclusion to the thesis:

From the study several conclusions can be drawn. The first is that for Paul, Christ is the ultimate example to be imitated. He mentions Christ specifically in 1 Corinthians 11:1, Ephesians 5:1 and 1 Thessalonians 1:6. In 1 Corinthians 4:17 Paul mentions that Timothy will show the Corinthians “[his] ways which are in Christ.” In Philippians 3, Paul wants his readers to follow his example as he “press[es] on toward the goal for the prize of the upward call of God in Christ Jesus.” The use of mimeomai (the Greek word from which we get our verb imitate) in 1 Thessalonians 2:14 so closely parallels the one in 1:6 that the example of Christ must be seen there also. It is only the uses in 2 Thessalonians in which no direct link to Christ can be found. However, what better example can be found of one who willingly endures forfeiting a privilege for the sake of ultimate good of others than Christ? So Christ can be indirectly seen in this passage also. Therefore a proper understanding of who Christ is will prove essential to understand and apply the fullest implications of the passages [that use this word group]. For the modern believer, there is no other way to understand who Christ is and what he has done than by the study of Scripture. If Christ is the ultimate example of how a godly life is to be lived then it is important for the reader to study the life of Christ.

The second conclusion is that for Paul understanding of the word of God is essential for a believer to practice imitation. From the passages in 1 Thessalonians it can be seen that proper living cannot be accomplished without knowledge of Scripture.

In both passages where imitation is mentioned in 1 Thessalonians, the word of God is mentioned in the immediate context. In 1:5 Paul mentions his gospel, which is his teaching about Christ. In 2:13 he mentions “the word of God’s message” which worked in the Thessalonians to produce good results. In both cases the imitation to which Paul refers is dependent upon the teaching of the gospel of Jesus Christ.

The third conclusion which can be drawn is that Paul wished to use imitation as the means of training new believers in the faith. From Paul’s comment in Philippians 3:17 where he says, “mark those who walk according to the pattern you have in us,” it can be concluded that Paul sees that it is good for those who are novices in the faith to imitate those who are farther advanced.

This can be seen in 1 Thessalonians 1:7. The Thessalonians imitated Paul and then became an example to the believers as a result of their good behavior. Paul wishes that believers imitate Christ-like behavior in others as God reveals their needs through the Holy Spirit. Again, Scripture must be used as the standard of judgement as to determine who is fit to be imitated as well as what aspects of their behavior are to be imitated.

It is good to be reminded that this process is not just a passing on of tradition or knowledge. It is a dynamic method of growth of both the individual believer and of the body of Christ. The process is supernatural and is superintended by the Holy Spirit. Human traditions degenerate as time wears on but the example of Christ is renewed daily in those believers who have put their trust in Him and are living by the Spirit’s guidance. These believers still remain imperfect in this life but are an example in those areas of their lives where they have given the Holy Spirit free reign.

Herod sought to eliminate a threat to his power, but that threat represented God’s plan for the salvation of humanity, a plan that God would not allow to fail.

In an effort toward continuous improvement, I am constantly tinkering with the structure of Attempts at Honesty. Specifically, I want to make it easier for people to comment on posts. Over the years I have tried a variety of comment plugins. Disqus, Livefyre and Jetpack were some of the plugins that I have tried but […]

I have heard that there are those in the church who do not feel that apologetics should be part of the discipleship process for believers . . . A statement in the book of Nehemiah got me thinking about defending our faith and the need for such defense.

In some churches I have attended, there is a sense that the gospel entails the elementary teaching of Christianity. To move toward maturity then requires that people move beyond the gospel into more “meaty” doctrinal teaching.

I have come to realize that this is wrong headed and leads not to maturity, but to immaturity. The effect of this teaching is the exact opposite of the desired result.

Perhaps we should hit the pause button and stop to think about what kind of disciples we are making. We would do well to remember Jesus’ words in Matthew 7.