≡ Menu
You are here: Home / Bible Reflection / On mites and absolute value

This morning I thought of the story of the widow and the mites (King James Version) she gave to the Temple treasury. The story is found in Mark 12:42-44:

“A poor widow came and put in two small copper coins, which amount to a cent. Calling His disciples to Him, He said to them, ‘Truly I say to you, this poor widow put in more than all the contributors to the treasury; for they all put in out of their surplus, but she, out of her poverty, put in all she owned, all she had to live on.'” (NASB) 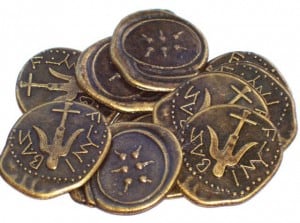 Those of us who have heard this story before may think of this story in a monetary framework. The rich man gives millions but it doesn’t amount to the same level of giving as the widow who gave all she had. Maybe it is only me, but I gravitate to evaluating the gift based on a percentage of net worth. In this type of thinking the evaluation is reduced to a simple math problem.

However, I think that this understanding does not go far enough. The point I take from this is that God’s economy works on an entirely different value system.

We rightly think about doing great things for God, but perhaps we get confused in our understanding of what constitutes greatness. For example, it may be that the addict who learns to face his past while remaining sober has done more in the Kingdom of God than the talented preacher who draws thousands on a Sunday morning. The man caring for his wife with dementia may be doing more than the CEO of a world relief organization. We think in numbers and measurement. God thinks about the heart and commitment.

Careful in your judgment

We must be very careful when making judgments about the value of people to the Kingdom of God. Jesus expressed the same concern when he said:

“But when you are invited, go and recline at the last place, so that when the one who has invited you comes, he may say to you, ‘Friend, move up higher’; then you will have honor in the sight of all who are at the table with you. For everyone who exalts himself will be humbled, and he who humbles himself will be exalted.” (Luke 14:10–11, NASB)

The King is the one who knows the real, absolute value of his subjects. We should be concerned that in our jockeying for position we slight one who will fare better when it comes time to receive rewards.

In the end, the only question we should ask is “am I doing all the God has called me to do.” Honesty requires that I answer this in the negative; I fall short of what I am called to do. Therefore, I should work first on getting my own life in order before standing in judgment of someone else.

We need to learn to appreciate the mites that are given in genuine worship. When we do, we are drawing nearer to the mind of God.

I am learning that success in any endeavor cannot be the gauge by which I assess myself. My value does not come from what I do or how successfully I do it. My value comes from the one who gave his life so that I might be in relationship with him.

There are plenty of Bible apps already out there, and some very cool ones I might add. However we’re going to provide something a little different and provide a different spin on them. Among the different types of apps we’ll have are prayer tools and games. We feel like the mobile app community is lacking some powerful religious apps. The mobile world is growing larger each day and we don’t want religion to get left out!

But when the church, through its faithfulness and its discernment of the times, lives truly ‘in’ but ‘not of’ the world, and is therefore the City of God engaging the City of Man, it touches off the secret of its culture-shaping power.

It seems to me that even those who would not acknowledge the idea of sin still have feelings that they should be better than they are. Almost any sentence that begins with the words, “I ought . . .” would give evidence in support of this assertion.

It is important to think about what we say to a world that needs Jesus. Some of our cliches are not helpful. In this post I consider one and explain why I think this cliche should be avoided.

Recently, a news story broke that implicated many world leaders in hiding billions of dollars of money in off-shore corporations. In my country, trust in the government is at an all time low because many (most?) of them make decisions that line their own pockets regardless of the consequences. Our leaders have betrayed our trust […]