The prophet Nahum tells us

The Lord is slow to anger and great in power, And the Lord will by no means leave the guilty unpunished (Nahum 1:3) 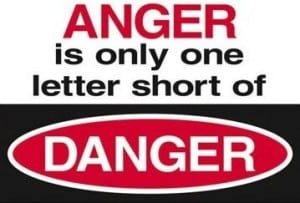 We misrepresent God by being quick to anger rather than slow. Many examples of harsh comments on blog posts and angry rants by those who claim to be Christian can be found on the internet. I have been sent YouTube links showing sermons by pastors condemning people for grievous sins such as women wearing pants or using any version of the Bible other than King James. When Christians behave in this way, we lend support to the view of God as an angry deity who can’t wait to mete out punishment on sinners.

This is not the picture of God that we see in Jesus. Jesus was called a “friend of sinners.” The bottom rungs of society flocked to him and enjoyed being around him. Why? Perhaps because he was slow to anger and interacted with those people with grace and acceptance.We would do well in imitating Jesus in this.

I am too often quick to anger, especially when my pride has been assaulted. There have been many emails and a few blog posts that I’ve had to delete because my response to a situation was in anger rather than grace. There have also been some emails that I should have deleted, but didn’t which caused me some trouble. My anger accomplishes nothing good.

Nahum reminds us that being slow to anger does not mean that the knuckleheads will get away with anything.  Notice that he tells us that God will not let the guilty go unpunished. Rather than responding in anger, the fact that the guilty will not go unpunished should spur us to prayer on their behalf. God is slow to anger and is longing for the guilty to repent. We should share in that longing rather than looking forward to their punishment.

It seems to me that if we want the world to allow us to confront their sin, we should first learn to confront our own sin. When we allow God to displace our anger and replace it with love and grace, then the world will know that our message is one that should be heeded. We will then have the evidence to show that the Gospel is indeed good news.

In some churches I have attended, there is a sense that the gospel entails the elementary teaching of Christianity. To move toward maturity then requires that people move beyond the gospel into more “meaty” doctrinal teaching.

I have come to realize that this is wrong headed and leads not to maturity, but to immaturity. The effect of this teaching is the exact opposite of the desired result.

I would like to share the following quotation from Forgotten God, by Francis Chan: “I don’t want my life to be explainable without the Holy Spirit. I want people to look at my life and know that I couldn’t be doing this by my own power. I want to live in such a way that […]

So while I think there is nothing inherently wrong with wailing guitar solos and smoke machines as part of the worship experience, perhaps we should pump the brakes on the drive to make worship like a rock concert and the sermon like a motivational seminar.

I have nearly completed my sixth decade of life, nearly all of it as a believer, yet I find myself trying to earn the approval of both God and the people around me. I need to transition from trying to earn God’s approval to responding to the love and acceptance that I already have. Rather than an initiator, I need to be a responder.

Too often, we fight the culture war by digging a trench and lobbing arguments at the enemy trench. Better we meet between the trenches.