Home Christianity and Culture A Celebration of Death? – Response to the Death of Osama Bin Laden

The announcement of the death of Osama Bin Laden reminded me of a post originally published in February of this year. I have taken the text from that post and added additional comments below. 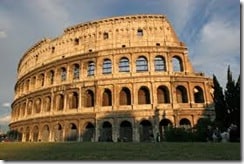 As we toured the Colosseum  in Rome, the guide  described the events that were staged in that structure over a four hundred year period. There were gladiatorial battles, men hunting animals, animals hunting men, executions and other grisly displays. Each spectacle ended only when one side in the battle was killed or rendered unable to continue fighting.

Our guide made a special point about the fact that they would put sand on the wood floors to allow the competitors and victims to have traction in the midst of the blood that would inevitably flow.

In the 21st Century, we can easily feel superior to these Romans who sat and applauded such waste of human and animal life. We wonder how civilized people could enjoy such entertainment.

Upon further reflection, however, I have to come to grips with the fact that there are many movies and television shows that are just as graphic and grisly as the entertainment in the Colosseum. The fact that real blood is not being shed does not make the acts displayed any less despicable.

I’m asking these questions of myself and sharing them with you as food for thought as we consider what is healthy and appropriate for entertainment. Before we condemn the ancient Romans, we should be honest about how much we are like them.

Yesterday it was announced that Osama Bin Laden was killed. Should Christians rejoice in this? I don’t think we should.

Perhaps there should be a sense of relief that a man who pursued evil has been prevented from inflicting further harm. Romans 13:1-7 tells us that governments have been put in place by God to restrain evil. Osama will no longer be a threat and this is a relief.

Yet, I cannot find any evidence in Scripture that there should be rejoicing in this. Ezekiel 33:11 tells us that God does not rejoice when a wicked man dies, neither should we.

Yet in our mourning, we should remember that God is in control and is moving events toward his ends in his time. One day all will be set right. Then we will rejoice.

So living in the not yet, we struggle with the pieces of the world (including ourselves) that are not in submission to Christ. That is the bad news.

The good news is that one day Jesus will return and set everything right, including my stony heart.

Jesus is not saying that we should not give to the poor if our hearts are not exactly right, but we should be aware that our motives may be less than ideal when we do it.

If evolution is true on what basis do we blame others? Where does the need to blame come from? This post is part 2 of a 2 part series.

Leaders need to periodically gauge how well they are doing with regard to equipping their people. If you find that improvement can be made, try something new. Use one of the ideas above or listen to the ideas of your people. There is no one-size-fits-all solution.

Our family went to the Poconos to take on the challenge of a ropes course. I didn’t know what I was in for but it was fun. Is the ropes challenge a fitting metaphor for life?