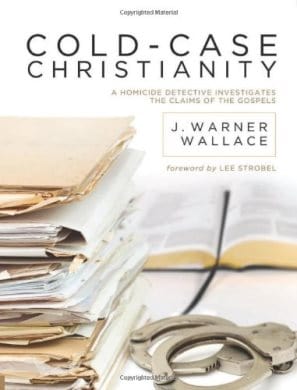 A while ago, J. Warner Wallace approached me about doing a review of his book, Cold-Case Christianity: A Homicide Detective Investigates the Claims of the Gospels

. I was aware of his work as a result of reading the Cold Case Christianity Blog and was interested in reading the book so agreed to to the review.

Based on my previous exposure, I expected the book to be worth reading and in this I was not disappointed. I especially like the way that Mr. Wallace weaves in stories from his days as a detective to illustrate the principles found in the book.

The premise of the book is that the author, who spent many years as a cold case detective, would apply the lessons learned in investigating old murder cases to evaluating the claims of Christianity.

Here is how the author describes the similarities between investigating cold case murders to investigating the claims of Christianity:

Unlike other lesser crimes, an unsolved homicide is never closed; time doesn’t run out on a murder investigation. My particular agency has dozens of unsolved murders that remain open, waiting for someone to take the time to reexamine them. There are many similarities between investigating cold cases and investigating the claims of Christianity. Cold-case homicides are events from the distant past for which there is often little or no forensic evidence. These kinds of cases are sometimes solved on the basis of eyewitness testimony, even though many years have passed between the point of the crime and the point of the investigation . . . Christianity makes a claim about an event from the distant past for which there is little or no forensic evidence. Like cold cases, the truth about what happened can be discovered by examining the statements of eyewitnesses and comparing them with what little additional evidence is accessible to us.

J. Warner had me hooked right from the start of the book with a story about how a police officer learned to trust his bullet proof vest as a result of a shoot-out with a parolee who did  not want to return to jail. As the story was related in print, the hours that I wasted watching crime dramas through the years finally paid off as I could clearly imagine the scene as it was described in the book.

What I like about the book is that it covers many topics of an apologetic nature in a non-technical way and free of jargon. If any words are used that are particular to the study of apologetics, they are explained in side bars throughout the book. In addition, there are helpful graphics sprinkled throughout the book that help illustrate the ideas being presented.

There are two major sections to the book. The first is called “Learn to be a detective” where Mr. Wallace goes through the process of collecting and evaluating the various bits of evidence for the subject in question. Using his experience as a detective and using real-life stories as illustrations, we learn how to sort through the evidence to determine its value in arriving at a conclusion. In the second section, J. Warner walks us through the process of using those principles to examine the claims of the New Testament.

I have the privilege of being a small group leader for our church. While reading the book, I came up with the idea that it would be a great book for the small group to read and discuss this fall. So, I vetted the book to the members of the group and the unanimous opinion is that we will indeed work through the book this fall.

In addition to use in small groups, I think that this book would be a good recommendation for someone who wants to examine the claims of Christianity. Like Mere Christianity and A Case for Faith, a non-theologian and former skeptic walks us through his journey to faith through examination of the claims of Jesus Christ.

It is a worth while read and a book that will likely spend little time on your shelf since it is likely to be lent out over and over again.

To avoid stress and burnout in pursuit of our calling, we must rely on the sovereignty of God. We cannot do it all, but we must do what God calls us to do.

What is needed to-day is not a new gospel, but live men and women who can re-state the Gospel of the Son of God in terms that will reach the very heart of our problems.

Wendell Berry’s essay entitled “Damage” inspired thoughts about how church leaders can without intention cause damage by falling into the errors of Pharisaism.

“To the divine providence it has seemed good to prepare in the world to come for the righteous good things, which the unrighteous shall not enjoy; and for the wicked evil things, by which the good shall not be tormented. But as for the good things of this life, and its ills, God has willed […]

Moses warned the Israelites to not add or subtract from the commands of Scripture. We would do well to heed this warning. How does this apply to us in 2013?

Perhaps it is only my warped sense of humor, but this strikes me as funny. The Pharisees preferred Lazarus dead rather than have him there to challenge their beliefs. The Pharisees, who thought themselves a light to the nation, could not tolerate the presence of one whose very existence was a critique of their life and practice.