On Saturday, I saw this Tweet from Ed Stetzer: 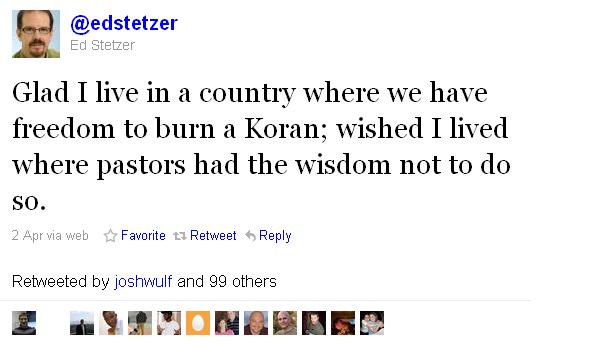 I agree with Ed and apparently so do others since this was retweeted 100 times to date.

I also appreciated Jeremy Myers’ response in his blog.

This morning I read in Acts 17 where Paul proclaimed the Living God at the Areopagus in Athens. Perhaps Terry Jones has never had to preach through this particular section of Scripture. Had he studied it, I wonder if he would have thought that burning the Koran was a good idea.

In this passage, Luke records that Paul entered into the discussion group, acknowledged that the men were religious and went on to politely highlight the differences in belief between their polytheism and his faith in Jesus.

The same Apostle who preached in the Areopagus tells us to “speak the truth in love” in Ephesians 4:15. We are to tell people what they need to know about the living God but as the example of Paul in Acts 17 shows us, it should be done with wisdom and love. It should never be done in a way that intentionally gives offense.

I like the proverb, “it’s better to light a candle than to curse the darkness.” Instead of telling people they are wrong, perhaps its better to gently and respectfully tell them what the Bible says.

Links gathered in the last week that you might interesting or helpful.

In reading through the Gospels, I am reminded that it is possible to take a strong stand against sin while honoring and loving those who participate in it. A paragraph that I read in Learning Evangelism from Jesus captures this thought well: “But Jesus was a different kind of holy man and teacher. We have […]

At the foundation of the “new atheism” is the belief that there is no God, no eternal and infinite Source of all that exists. This is the key belief that needs to be established in order for most of the other arguments to work. Int is my contention here that the “new atheists,” Richard Dawkins, […]

This verse in Isaiah encourages me that at some point justice will be established. We will no longer experience terrorism, disease, or government corruption. We have a hope that rises higher than any flood of bad news that comes our way.

Because an increasing percentage of traffic is coming from mobile devices, it was necessary to find a theme that better responds to mobile users.

It has been said that the church is the only army that shoots its wounded. Sometimes the wounds are caused by friendly fire. It is the responsibility of church leaders to identify and correct this when it happens.