≡ Menu
You are here: Home / Christianity and Culture / Even Lawyers Can’t Mess This Up 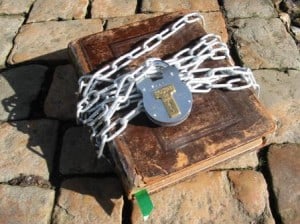 At our church, we are studying through the book of 2 Timothy in the New Testament. A line from Chapter 2 struck me where Paul writes, “but the word of God is not bound.” Paul is saying that even though he himself is bound, Scripture cannot be put in chains.

Our society is becoming increasingly restrictive as to when, where and how Scripture can be displayed or read out loud. Efforts are made to prevent the Bible from speaking into our society in an effort to live free from moral restraint. Lawyers around the country have brought suit to remove the Bible from mainstream thought.

When Charles Spurgeon was asked how to defend the Bible, his response became a classic. He suggested that those who attack the Bible are like men who seek to attack a caged lion with clubs. In that case, one does not have to defend the lion, one merely has to let him out of his cage and he will defend himself.

A couple of applications come to mind.

First, in light of the recent ruckus over the burning of the Koran (which was an inherently stupid thing to do), I suggest that burning of the pages of the Bible would not produce the desired result. We do not venerate the paper and leather on which Scripture is printed and bound, we venerate the words themselves as coming to us from God. However symbolic the Bible burner considers his act, neither God, nor the Church is diminished by it.

Another application of this is that we should take any opportunity to read, teach, preach and distribute the Bible. God promises that Scripture cannot be bound and it will affect change. My reading it will change me. My teaching it will change others. This is an appetite that can and should be passed on, a healthy addiction.

The reason why enemies of faith border on paranoia about the Bible is that the Chief Enemy knows how effective it is in changing individuals and society for good.

We should take this opposition as a sign that our efforts to teach Scripture are not in vain. God will bless the distribution of his Word. With regard to standing against the Enemy of Scripture, I will end with the advice of Winston Churchill:

How should the church respond to Chreasters, those who attend on Christmas and Easter? Is there anything we can do to keep them coming? I think there is and it isn’t very complicated.

In reading the “new” atheists, I see confirmation of the Apostle Paul’s assertion that their unbelief is not due to the lack of evidence but the suppression of it. There is a large difference between those who are truly seeking answers to difficult questions and those who are unwilling to believe no matter what the […]

In the internet age, civility seems to be the primary casualty. It is so easy to vent our judgment and hostility to those with whom we don’t agree. Unfortunately, those in the church sometimes share in this trollish behavior. There have been times when I have read social media posts and cringed at the lack of sensitivity to those who don’t share our beliefs.

Question 26 of the Westminster Shorter Catechism asks, “How does Christ fill the office of a king?“ The answer given is, “Christ fills the office of a king in making us his willing subjects, in ruling and defending us, and in restraining and conquering all his and our enemies.” The first thought inspired by this […]

In reading the book of Isaiah, I get the sense that with the advent of electronic media, we have improved the speed of communication but not the quality of the content. Solomon said that there is nothing new under the sun and this passage confirms it. Isaiah describes a nation that is in the midst of […]