≡ Menu
You are here: Home / Apologetics / Getting caught in the blame game – Part 1 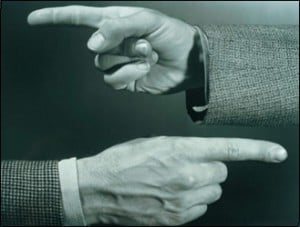 I am neither brilliant nor a philosopher so I make no claims toward brilliant philosophy. Yet I have observed a behavior in humans that I would like to explore. This being a presidential election year, examples of this behavior abound. I am writing about the behavior of blaming others. Where does this need to blame come from?

My question is this: if naturalism, the belief that we are products of natural processes and not the product of divine intervention, is true, they why is there so much effort wasted in finding someone to blame whenever anything goes wrong?

I have a puppy which displays normal puppy behavior. Specifically she likes to chew things and dig. Even when she chews things that are unacceptable (such as human fingers and clothing) I see no sense of remorse in her or the need to blame anyone for the behavior. Another dog of ours felt the need to chase a skunk and displayed no remorse when he came back to the house bearing an odor from the encounter. He ran right into the house as if nothing was wrong or out of the ordinary.

In the case of dogs, one could argue that they act in the way they are wired to act. While humans can change that behavior somewhat, the extent of change is limited. The bulk of their behavior is determined by their DNA.

Humans have the distinction of not only being able to understand and respond to what is, but having a sense of what ought to be. Chance and genetics might explain what is, but they cannot explain why we often think that things should be different than they are.

If we believe that what we are is determined by our DNA, then why bother assessing blame? Why spend so much effort in figuring out who made the mistake, who made the bad choice, who pushed the wrong button?

I will take it one step further. We send future executives to colleges and graduate schools that teach them that they are products of evolution and that there are no absolute standards of right and wrong. They are taught that they make their own rules and no-one can tell them how to live. Then when they live this way in the business world we throw them in jail because they violate insider trading laws or cook the books and bilk millions out of unsuspecting investors. Is this not a double standard?

Why all the angst in the recent “occupy” micro-movement? If Wall Street executives are doing what they are programmed to do, why bother to protest? If naturalism and evolution are true, on what basis are you protesting anyway? On what basis are you claiming unfairness if there are no absolute standards of right and wrong? If strength and cunning are the means of survival, then why protest when the strong and cunning violate the weak and ignorant?

This post will be continued in part two where I will explore how the Bible speaks to these issues and provides a reasonable explanation of what we observe in humanity.

I have heard it suggested that it is a profitable exercise to write out what one wants on his tombstone and then live the rest of his life making it true. In the spirit of this suggestion, I would like to be described like Noah in Genesis 6:9. In that verse, there are three statements […]

The phrase “leanness into their soul” stood out to me because it seems an appropriate description of the society I see around me. In America, we have more prosperity and less leisure time with which to enjoy it. We have more channels with less worth watching. We have more methods of communication and seemingly less to say.

For the first time in my adult life, I don’t like either candidate that the major parties have put forward for the office of President of the United States. I see more harm than good coming from either candidate being elected to that office. I wish we could have a do-over for the primary elections, but alas we cannot.

For effective change to take place in an organization, the leader must understand the needs of the organization and select the proper tool to drive that change. The analogy of using water, a chisel or dynamite to change rock provides some insight as to the proper speed and amount of change that is needed.

If I approach the text with humility and self-denial the result will be much different than if I approach it with a sense of superiority and judgment.

Attempts at Honesty is under construction as we customize the installation of our Pagelines theme. The colors, graphics and fonts will be changing over the next few weeks as I learn more about Pagelines.