≡ Menu
You are here: Home / Bible Reflection / Seven Types of Robbers In The House Of Prayer 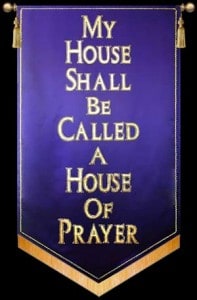 “My house shall be a house of prayer, but you have made it a den of robbers” is a statement of Jesus found in Luke 19:46. He made this statement in response to those who were selling animals and changing money in the Temple.

In my lifetime, the church has done a pretty good job of preventing the sale of animals and banking transactions from taking place on church grounds. On the surface, we have followed the teaching of Jesus in this regard.

As I reflect on this statement, I have an increasing level of discomfort about how well we’ve done in following the principle behind the statement.

What are robbers? There are two aspects of a robber that come to mind. The first is that he is not concerned about what is right and what is wrong. The robber is willing to take what is not his.

The second is that he is acting on his own behalf and not concerned about the welfare of others. The robber satisfies his own needs at the expense of another.

We don’t sell animals and we don’t cheat people by making them exchange their money. That’s good, but there are other ways we can emulate the people condemned by Jesus. We can keep the letter of the law while violating the principle behind it.

The principle is that we are to be about our Father’s business which is that of reconciling a hurting world with the loving Father. We are to be about His business and not our own. But, too often on a Sunday morning, our involvement is all about what is good for us and not what is pleasing to God and beneficial to others. If we do not come to the church meeting with the right motivation, we can then become like the robber.

So, instead of smugly reading this passage and patting ourselves on the back for not allowing commerce to take place on church grounds on Sunday, let’s look at the real business that we are to be about.

The ancient Israelites missed the point of Temple worship and if we are honest, we sometimes struggle to stay on track. We live in a culture that encourages us to live for self first.

We need to allow God to show us where this selfishness has corrupted our worship and practice. The proper response then is to repent and allow God to bring change.

Because of wrong belief and practice, we’ve abandoned a lot of spiritual territory to the Enemy. It’s time to begin the battle to take it back . . . before it’s too late.

We all want grace, but sometimes struggle to give it when it is most needed. We are in constant danger of offering selective grace by offering it to some and withholding it from others.

How do we define success in ministry? How do we distinguish whether a ministry is on track? Is it even quantifiable? These are not rhetorical questions; I am hoping that you take the time to respond. Is success in Christian ministry quantifiable? Jesus gave us two commands and one mission. We are to love God […]

Can we admit the fact that we like being the one who knows the answer? Can we admit that sometimes we respond with our primary motivation to be admired for our knowledge? After we repent of our pride, we can then seek to be used by God to assist others in drawing into deeper relationship with Jesus.

Joseph learned that even though his brothers were evil toward him, God remained in control and even the evil coudl be used by God for good.

We probably all have at least one acquaintance who makes us nuts with their social media posts because we know that their life is not as pleasant as Facebook would make it appear. According to Facebook, every social event they attend is wonderful and they had a great time and were appreciated by all. This […]