≡ Menu
You are here: Home / Apologetics / Wanted: A Point of Reference 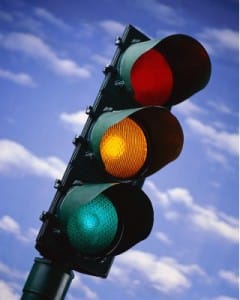 When you are sitting at a stop light in your car and see motion out of the corner of your eye, there are two responses. The first is to push harder on the brake pedal and the second is to look at a lamp post, building or some other stationary object to see if your car moving.

To gauge your own movement requires a fixed object as a point of reference.

In the same way, ethics or morality are only valid if there is some point of reference by which behaviors can be compared. There can be no discussion about ethics if there is not a shared moral code by which to judge.

If you start with the premise that there is no God and all that we see is a result of time plus chance, then statements about morality and ethics can only be expressions of preference since there is no basis on which to declare any particular behavior right or wrong.

It appears that a majority of those who espouse the mantra that “there are no absolute values” have not thought through the implications of this belief. If there are no absolute values, then there can be no real discourse to solve conflict. Conflict would then be resolved by the stronger dominating the weak. Do moral relativists really want to live by the evolutionary code of survival of the fittest? If this premise is true, on what basis would the Columbine shooters or the Virginia Tech shooter be condemned? Were they not doing what their DNA told them to do? Were they not pursuing what they thought was the best course of action? On what basis would Hitler or Stalin be condemned? Were they not doing what they thought was best for their respective countries?

Thankfully, these men have been almost universally condemned, but on what basis?

Tim Keller makes the point that if you start with a premise and the results are not in accordance with observed reality, the premise should then be reexamined. We can observe that a majority of people do not live as though there are no absolute values. We collectively value human life. We define some behavior as criminal and punish those who pursue it. Observed reality is that we do define some behavior as wrong, therefore the premise must be wrong.

There is something in humanity that seeks to know where to draw the line between acceptable and unacceptable behavior. Naturalism cannot explain this, nor can it provide a means of drawing that line.

But, if we start with the premise that we are here as a result of a creator God and that He has revealed to us universal principles by which we should live, then we have no problem explaining the desire for standards. In addition, such a God provides the point of reference by which the standards can be established. The premise of a creator God seems to better explain observed human behavior.

Atheist authors present God as vengeful and capricious. Jesus presented a very different picture of his father. We must choose the correct perspective to view God correctly.

The announcement of the death of Osama Bin Laden reminded me of a post originally published in February of this year. I have taken the text from that post and added additional comments below. February 2, 2011: As we toured the Colosseum  in Rome, the guide  described the events that were staged in that structure […]

Jesus loved well and turned the world upside down.

I do a lot of whining to God. One one hand, God is the perfect target of whining because he can take it, and he can bring correct to me and the situation that I’m whining about. But in thinking about this, I realize that there is no room for self-pity in Christian maturity.

I am forced to admit that I made the chains binding me to the merry-go-round. They are of my own manufacture. But they no longer need to bind me.