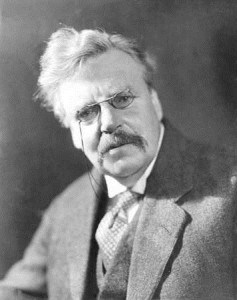 “Modern masters of science are much impressed with the need of beginning all inquiry with a fact. The ancient masters of religion were quite equally impressed with that necessity. They began with the fact of sin – a fact as practical as potatoes. Whether or no man could be washed in miraculous waters, there was no doubt at any rate that he wanted washing. But certain religious leaders in London, not mere materialists, have begun in our day not to deny the highly disputable water, but to deny the indisputable dirt. Certain new theologians dispute original sin, which is the only part of Christian theology which can really be proved. Some followers of the Reverend R. J. Campbell, in their almost too fastidious spirituality, admit divine sinlessness, which they cannot see even in their dreams. But they essentially deny human sin, which they can see in the street. The strongest saints and the strongest sceptics alike took positive evil as the starting-point of their argument. If it be true (as it certainly is) that a man can feel exquisite happiness in skinning a cat, then the religious philospher can only draw one of two deductions. He must either deny the existence of God, as all atheists do; or must deny the present union between God and man, as all Christians do. The new theologians seem to think it a highly rationalistic solution to deny the cat.”

For the modern believer, there is no other way to understand who Christ is and what he has done than by the study of Scripture. If Christ is the ultimate example of how a godly life is to be lived then it is important for the reader to study the life of Christ.

In response to the idea that religious faith is blind faith, I ran across this paragraph from John Lennox and thought I would share it with you.

Too often we try to earn God’s blessing when it has already been granted. Miles Stanford warns leaders against laying conditions for blessing on the church.

In our never-take-no-for-an-answer, pull-yourself-up-by-your-bootstraps culture, perhaps it is difficult to understand Jonathan’s actions in 1 Samuel 20:12-17. We live in a world where self-promotion is expected; encouragement to “look out for #1” is covertly or overtly stated in almost every advertisement. We often look for validation in job titles, paychecks, hit counts and followers. Jonathan […]

I know what hurt has come from some of my own church experience. I have seen the damage done to others by inappropriate treatment within a church. Quite frankly sometimes it makes me want to find the reset button and see if we can begin again with this whole thing we call church.

The comparison of light and darkness in a 3 Doors Down lyric caught my ear. Can the light be found? What does the Bible say?