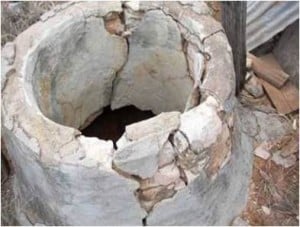 Nature abhors a vacuum is a proverb that came to me as I contemplated Jeremiah 2:12–13 recently:

12 Be appalled, O heavens, at this; be shocked, be utterly desolate, declares the Lord, 13 for my people have committed two evils: they have forsaken me, the fountain of living waters, and hewed out cisterns for themselves, broken cisterns that can hold no water. (ESV)

This prophetic statement was made to the Nation of Israel who had rejected God’s principles for living and had replaced worship of the Living God with the pagan rituals of the surrounding nations.

Anyone who has spent time in an arid climate understands the importance of water. A source of water is the first necessity in choosing a place to live. A spring, creek or river which flows year round would be the first choice. Living (moving) water is fresh and clean, and if it comes from a spring the water is cool.

A cistern, on the other hand, collects the water when it rains and the water becomes stagnant. As the water sits, microbes and insects grow in it and dust collects. It is water, and it will keep you alive, but is not nearly as pleasant as flowing water.

But notice that God makes reference to broken cisterns that can’t even hold water. It is not that the Israelites had chosen a viable alternative source for what they need. They had rejected God and replaced him with empty rituals that provided no benefit.

In 21st Century America, there is a renewed and more vigorous attack on the Judeo/Christian principles upon which this country was founded. The “new” atheists would like to remove thought and speech about God from public discourse. Religion is viewed by them as an old fashioned idea that has outlived its usefulness.

The popularity of books by Sam Harris and Richard Dawkins is evidence of how many in our society have adopted this premise. Yet, have the readers of these books thought through the implications of this choice?

Remember, nature abhors a vacuum. If we reject God and exclude him from our society, something will replace him, but what? Where will we find our guiding principles? Who or what will prevent totalitarianism? What will the “new atheists” give people as a means of determining value?

It is my opinion that if the Western culture continues the rejection of the Judeo/Christian God and his principles, society will succumb to one of two types of totalitarianism.

The first option is an atheistic totalitarianism such as fascism or communism. It is no mystery as to why atheism is the religion of the communist states. The communists build upon the concept of Darwinism; the strong dominate the weak. The “state” becomes the guide by which all decision should be made. Choice and freedom are greatly reduced or eliminated and conformity to the state is enforced.

The second option is a religious totalitarianism such as that of Islam and Sharia law. This is probably the more dangerous and likely option because of the devotion that Islam engenders. Islam is the fastest growing religion in the world because of its militaristic foundation and its goal of universal conquest.

How will atheism stand up to Islam? I have never been aware of any atheist that was passionate enough about his atheism to strap a bomb on his body and die a martyr. This is commonplace (if misguided) in Islam.

The third and best option is for us to return to the God upon whom our country was founded. It seems to me that the only places where freedom of expression and freedom of belief have been in operation have been places where Christianity once held a dominant position. That freedom is the living water that we crave. Why reject that freedom when bondage is the alternative?

Do we really want to reject the one system that engendered freedom to pursue systems that take it away? I hope not.

What do you think?

It may be true that the church has been out of balance the the preaching of “hellfire and judgment” to an unhealthy degree. What does Scripture say?

“I deeply believe that to become who God calls us to be, we must move in our thinking from isolation to integration. Christianity, if true, requires this.” Read more of this quotation . . .

Lately I’ve been thinking about how the church should interact with the surrounding culture. In my country, society is moving rapidly away from the Judeo/Christian moral framework. Seemingly, every point of view is tolerated with the exception of an overtly Christian one. In response to this, it is not difficult to find “culture wars” rhetoric […]

In his book Turning Points, Mark Noll quotes from St. Benedict’s instructions on selecting an abbot. As I read it, I thought that it is very applicable to church leaders in any generation so I thought I would share it here.

Jesus tells us in Matthew 11:28-30 that his yoke is easy and his burden is light. Why then do we make church so complicated? We have programs and activities that would make the average cruise ship activities director envious. We have men’s groups, women’s groups, singles groups, youth groups, coffee shops, concerts, ministry days, outreach […]