≡ Menu
You are here: Home / Church Leadership / On megachurch pastors and failure

I have no idea what really happened with Mark Driscoll, nor do I want to. This post is not about slamming him. The only thing I will say about Mark Driscoll is that the way he is being treated in the press seems wrong and illustrates a larger problem in society and the church.

When we move away from a proper understanding of the the fall of man we lose sight of the fact that every aspect of every man (and woman) carries the taint of sin. We are all flawed and left unchecked, those flaws will cause trouble.

The problem I see in society is that we have a celebrity culture which ascribes superhuman status to the lucky (or unlucky depending on your perspective) few who have been deemed celebrities. Celebrities can do no wrong and they always seem to get the benefit of the doubt.

Perhaps I am a poor student of history,  but I cannot think of any other time and place where rock-star status in one discipline made a person an expert in all others. We have musicians and actors that make political / social pronouncements as if they have studied the subject for a lifetime. Popularity provides an ascribed authority that is not in keeping with actual knowledge.

The church has fared  little better. We have our own rock stars that seemingly can do no wrong. If he is selling lots of books, it is presumed that he must be right. All those people couldn’t be wrong could they? Yet, a great preacher might be only s0-so at pastoral ministry. A great preacher might be a poor leader. We have to remind ourselves that no-one is good at everything.

The need for a prophetic voice 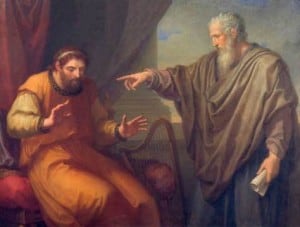 To give some perspective on this I suggest that we look for a moment at the difference between King David and King Saul in the Old Testament. Saul, had Samuel as a prophetic voice during his reign but he seldom, if ever, heeded the advice of Samuel. David, on the other hand, gave Nathan access to him and responded in repentance when Nathan confronted David on his sin. David saw the need to have a prophetic voice speak into his life and ministry.

In too many church cultures, there is a Pastor at the top with no-one around him who can function as the prophetic voice to offer restraint and correction.

I’ve been in a church where the Pastor was the ultimate (only) authority and it was a train wreck. People got hurt in the name of Christ for the sake of the Pastor’s “vision.” I do not think that this pastor did it maliciously or intentionally, but his intent does not matter, he will have to give an account for the lives he has damaged in the name of the one he claims to serve.

I want to be in a church that has a true plurality in the leadership and no one man holds most of the cards. Solo responsibility is too much power for even the best of men. Also, a plurality of leadership allows for multiple gifts and viewpoints to speak into any situation. We all have strengths and blind spots and a plurality allows for us to help others in their weak areas and be helped in ours.

I’m sure that Mark Driscoll has made mistakes in his leadership. Every leader has. But I wonder, if Mars Hill had helped Mark Driscoll avoid the pitfalls of celebrity, if things may have turned out differently. As it is, I hope that Mr. Driscoll repents in response to the accusations that he needs to own and that he can ignore the parts that are malicious and wrong.

But we all need to remember that ultimately Mark Driscoll will give his account to Jesus, not to us. This is the same Jesus who will call each of us to account and we will all be judged by the same standard.

So, I recommend that you put down that stone, you will only hurt yourself.

In my last post, I wrote about some church leaders’ misunderstanding of the role of the building in worship. This was in response to a note that I had gotten from a reader. In that note, the writer also said that the pastor of the church he visited made a comment about not allowing children […]

Jesus warned us that there would be people in our churches with improper motives for being there. The parable of the wheat and tares is one place where Jesus makes this distinction.

Looking back on some of my church experiences, I suspect that I have been in more than one church where the pastor confused ministry ends and means as Paul Tripp describes above.

The church has given non-believers cause to blaspheme the name of God. How have we done this and how can this error be avoided?