I find John 12:10-11 very informative on how I should respond to death:

10 But the chief priests plotted to put Lazarus to death also, 11 because on account of him many of the Jews went away and believed in Jesus. 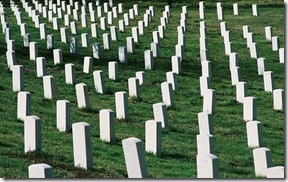 Perhaps it is only my warped sense of humor, but this strikes me as funny. The Pharisees preferred Lazarus dead rather than have him there to challenge their beliefs. The Pharisees, who thought themselves a light to the nation, could not tolerate the presence of one whose very existence was a critique of their life and practice.

The comedy comes in when you consider that the Pharisees are threatening to kill a man who has already experienced death and came back to tell about it. He could wear a tee shirt saying, “Death . . . been there, done that.” Lazarus’ life validated the words that the Apostle Paul wrote years later in Philippians 1:21, “for me to live is Christ and to die is gain.”

Lazarus had experienced what happens after death and come back to tell about it. As a result, the Pharisees wanted to kill Lazarus for the effect he was having on the people who heard his story. His experience validated Jesus’ claims of divinity and lordship and many believed.

I learn two things from the example of Lazarus.

First, while I do not know in great detail what it will be like following death, I have enough evidence to know that I should not fear it. Jesus promised to prepare a place for me. Paul, who experienced Heaven in a vision, tells me that what follows death is better than life. Therefore I should live a life free of the fear of death.

It is not enough to put away the fear of death, I should also live a resurrected life. If I believe with Paul that I have been crucified and raised with Christ (Galatians 2:20), my life should reflect the changes that resurrection brings. Like the Apostle Paul, my life should be lived differently following my encounter with the risen Christ.

My guess is that Lazarus lived life differently than he did before his experience. Were I to have Lazarus’ experience, I suppose the trivialities that now trip me up would have a greatly reduced effect on me, if any effect at all.

Perhaps a good gauge of how well my life reflects the resurrection is whether my impact on others draws them closer to Jesus. As a result of his experience of death and resurrection, Lazarus was used by God to bring people to right belief in Jesus. God wants to do the same with me. I simply need to choose to prevent my fears from getting in the way and live the resurrected life that is promised me.

The beginning of the Sermon on the Mount:  1 When Jesus saw the crowds, He went up on the mountain; and after He sat down, His disciples came to Him. 2 He opened His mouth and began to teach them . . .” (Matthew 5:1-2 NASB) At the end of chapter 4, Matthew informs us […]

The influential and powerful are no less loved by God than the poor and outcasts. God is concerned for their souls and I should share that concern.

In some churches, the words tradition or traditional are used in a pejorative sense. Anything that smacks of tradition is considered harmful to the desire to grow a large church. And since bigger is always better, tradition cannot be good.

Christians are to be followers of the Truth. Truth dispels shame and as a result, shame should not be a part of any church culture.

Whether or not we have the support of the current Pharaoh, Prime Minister or President, the church is called to be countercultural.

In reading through the Gospels, I am reminded that it is possible to take a strong stand against sin while honoring and loving those who participate in it. A paragraph that I read in Learning Evangelism from Jesus captures this thought well: “But Jesus was a different kind of holy man and teacher. We have […]